“To me, it was the greatest comeback I’ve ever seen.”
Michael Jordon.

“We did it.”
Tiger Woods to Joe LaCava after winning the Masters.

As the dust settles on another Masters tournament the Augusta chairman, Fred Ridley, and his inner circle could only have dreamt of the ensuing finish that made it (to borrow a phrase) one for the ages! It has been many years since such a crowded leaderboard dueled down the stretch with any one of a dozen players in with a shout as the day wore on. Indeed, eleven players finished within three shots of the eventual winner, Tiger Woods. His fifth Masters and 15th Major must have been the sweetest of all after an eleven-year gap during which even he admitted to Jack Nicklaus at the 2017 Masters dinner that he was done.

To put some perspective on how bad his injuries were, his longtime friend, Notah Begay, spoke of visiting Woods at his Jupiter home where he found a man that couldn’t walk, let alone play golf. Four back surgeries and numerous breakdowns would lead any sane person to believe Woods could never win a tournament again, let alone a Major. The image of Woods slumped over on a golf course as he struggled to compete, burns brightly as you try to make sense of a comeback that is in the realms of Ben Hogan coming back to win a U.S. Open after his infamous car crash. It doesn’t matter whose comeback was the greatest, that’s the beauty of sport, it’s an opinion, both can be considered for one of the great comeback stories in not just golf, but sports history.

“He is Tiger Woods,
after all, right?“

The strain on his body of playing an extremely hilly course with his back fused was evident in his press conference afterward where he admitted he wouldn’t be hitting golf balls the following day. The hours of painstaking rehab to get fit even to be able to play golf again are outside the experience of most mere mortals, but as his caddie, Joe LaCava remarked afterward, “I don’t know if I dreamt about it, but I pictured it. I wouldn’t have stuck around if I didn’t think he was capable of pulling something like this off. He is Tiger Woods, after all, right?”

This wasn’t the only mountain he climbed on his way back to the summit, his well documented self-inflicted family wounds no doubt affected his short game and he went through a terrible period of yipping the ball. This lasted for nearly 16 months and got so bad at one stage that it was difficult to watch, and this from a man who waved a wedge like a magician in his heyday. Yet in that final round, his chipping and pitching from Augusta National’s notoriously tight lies was exemplary.

He had to work his way back from the most public humiliation, a lost short game, and pain that must have been excruciating. His arrest for DUI turned out to be pain killer related, and you would have been placed on tablets yourself if you suggested this man could win a Major from this position. That is how extraordinary this win was with the legendary Michael Jordon remarking, “To me, it was the greatest comeback I have ever seen.”

What of the others?

Three players eventually finished within a shot of Woods, but two of them never struck me as winning. Dustin Johnson birdied four of his last six holes to put a sheen on his day while Xander Schauffele had five birdies in seven holes around the turn to pull himself up the leaderboard but after failing to birdie the very gettable par five 15th hole, the tank went dry and he could only par his way to the house.

The third player was one Brooks Koepka, a man that has won more Majors (three) than regular golf tournaments (two) and seems to have found the secret of how to turn up and compete for the Majors. Joe LaCava admitted afterwards that, “You’re watching Brooks, because he’s probably going to be the guy who’s going to do something if anyone’s going to do something, Brooks had made 5 at 12, but he was hitting everything to 10 feet, so I was thinking, this guy could come in at 14 under.”

The double bogie at twelve was pure inexperience; the great Jack Nicklaus always said never chase the right-hand pin on a Sunday at the Masters on this short par three hole. The wind swirls in the trees behind the green and television doesn’t do justice to the steepness of the front bank. Three players that were in contention found a watery grave here to put an end to their hopes of winning a green jacket. Molinari just hit a poor shot, he picked a bad time to mishit his eight iron, but when he found water again on the 15th, his hopes of beating Tiger down the stretch as he had done at the Open Championship were sunk.

Joe LaCava again on twelve, “Molinari’s one of those guys, he’s not going to go away, I was a little surprised he hit it in there.” I’d say he was astonished on the par five 15th, as our Frankie doesn’t do poor shots! But he will be back, “trackman with arms” is too good a player not to contend and the world number seven is a surefire contender in future Majors.

So how did Tiger win?

There is no doubt the short par three 12th hole was pivotal. As Tiger’s nine iron found the safety of the middle of the 12th green after watching three of his opponents implode on a line that the 1997 version of Tiger might have taken on, the 2019 version was way too smart and experienced to risk a gust of wind knocking the ball down into the water.

As he walked across the Hogan bridge he could have been forgiven for thinking of Robert Duvall in the classic Vietnam War film, Apocalypse Now, “I love the smell of napalm in the morning. It smells like … victory.” He scented victory, two-putted and got out of town. He went to work on the two remaining par fives on which he picked up shots and the final nail in the coffin was a sublime eight iron to the 16th hole to gimmie distance to leave him two shots ahead.

It was interesting to note that the course played some 700 yards longer than when he first won in 1997, and it was his driver and short game that helped him win. “I was able to hit the golf ball both ways this week, hitting high bombs from right to left like on 13, or the little flat squeezer fade like I did on 17, I hit some of the best shots on that back nine today. You know, I felt like I just flushed it coming home.”

Woods led the Masters’ field in greens in regulation, hitting 58 of 72, three more than anyone else in the field. He was 41st in putting against the field.

This was what he had in his bag
for the week!

The last word goes to Tiger himself, “To have the opportunity to come back like this,” he said, “it is probably one of the biggest wins I’ve ever had, for sure, because of it.”

And that emotional hug with his children at the back of the 18th. “For them to be here and see what it’s like to have their dad win a major championship, I hope that’s something they’ll never forget.”

Can he win another Major? Hand on heart I thought it was impossible that he would ever win again, but then I like many others forgot that he is Tiger Woods. If he never wins again, he has proven that he is a superhero straight from the pages of a Marvel comic book. He has nothing left to prove! 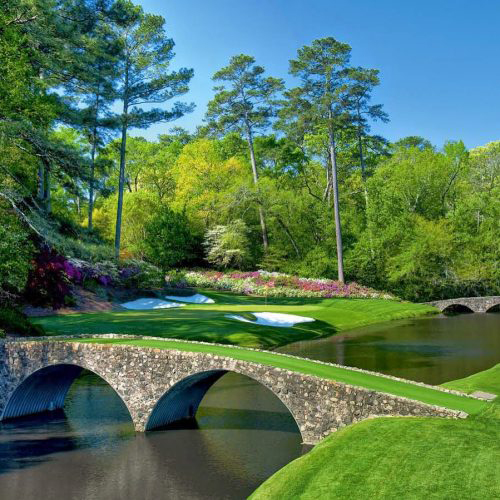