Walt Disney put it best when he said,
“We keep moving forward, opening new doors, and doing new things, because we’re curious and curiosity keeps leading us down new paths.”

This is the start of my twice weekly blog and to borrow a Tiger Woods phrase back in 1996 when introducing himself to professional golf, “Hello World!”
So how did I get here? How did I end up being consumed by this great game called golf to such an extent that I spend literally every waking moment trying to better myself at studying the art and craft of teaching golf? One thing is for sure, I couldn’t have done it twenty years ago, the word empathy didn’t exist in my universe.
I started life in a golf-mad family, where five boys plus sport equaled mayhem. Our father took up golf and we, of course, followed suit, we drove our mother to distraction, so she had to take up the game to see what all the fuss was about!

My youngest brother, Padraig Harrington, of course, went on to play professional golf, becoming a three-time Major champion and current Ryder Cup Vice Captain. We all played to a decent level, but I followed my father into the Irish police force where I spent eighteen happy years before moving on in an entirely different direction to owning a number of bookmaking shops.
I was always interested in figures and was very, so it seemed a natural progression. Everyone thought I was mad to leave the police force, but it helped make me what I am today!
We sold the business after seven years and with no real idea of what I wanted to do, my first big break into the world of teaching golf presented itself when I attended a Titleist Performance Institute seminar in Ireland back in the early 2000s. I still remember that weekend well and was hooked on their ethos of golfers swinging the club in the most efficient way possible for the body type they presented.
This started a fascinating journey for me that took me regularly to the USA to complete every teaching module they offered, from swing mechanics to functional training for golf. Finally, with a little help from young Padraig, I got the life-changing opportunity to spend three years working in the world-renowned TPI facility in Oceanside, California.
That was an eye opener of epic proportions; I mainly concentrated on golf biomechanics and short game strategies. Attention to detail, work ethic, and customer service were unspoken rules there, a place where legends like Scotty Cameron and Bob Vokey just wandered by, working on the next great wedge or putter. It certainly left an indelible imprint on me and has shaped the way I teach today.
I spent a hectic final year in 2009 working with Titleist tour players on the USPGA Tour, doing corporate work with some of the biggest corporate clients in the Nevada desert and finally, weekend seminar work for TPI all across the States and Europe.

To this day I owe the TPI co-founders, Dr. Greg Rose and Dave Phillips, a massive debt of gratitude for their encouragement and guidance. It was the perfect storm for me; I didn’t only possess my famous brother’s traits but helped instill them in him through years of caddying for him during his amateur career. We are both driven to be the best and couldn’t do anything (or wouldn’t want to) that we could excel at, and by excel I mean, THE BEST!
Finally, in 2010, after completing all the courses that TPI had to offer, I made the tough decision to return to Ireland to set up a golf academy based on their teachings but first hosted and presented a level one seminar for them in Dublin. Talk about coming full circle, and this was one of the proudest days of my life to have earned the trust of the guys in TPI to be allowed to organize and host the event. Thankfully it turned out to be a huge success and was well received by the Irish golfing community but true to that old adage that we never really know where life will take us, the grips of the recession put paid to my plans, for that driving range/golf academy.
I went back to college and for the next four years completed courses in digital marketing, video and photography editing and generally consumed every available business tutorial I could find including an economics course with David McWilliams which was very interesting!

I completed my coaching badges under the watchful eye of Dr. Liam Hennessy of Setanta College. To this day I try and finish one tutorial a day, maybe having not gone to college until the ripe old age of 38, I seem to find it hard to stop now! With the shoots of recovery appearing in the Irish economy in early 2014, I formed the Harrington Golf Academy with Ladies European Tour professional, Rebecca Codd, a 14-year veteran, whom I felt was the perfect fit to grow the business going forward.
Our mission statement was to provide long term coaching and refuse the quick sell of an individual lesson. It was a tough sell to the Irish public at first, but thankfully it has worked out well.
We have since built up the teaching side of the business to four locations,
Two indoor academies at Drynam Park Golf Centre in Swords and Belgard Road in Tallaght, a short game instruction area at Roganstown Golf Club, and finally, on course work at Killerig Golf Club!
We have invested heavily in technology, mainly based on my experiences in the States. It was a big draw over there for golfers to “know their numbers” and I feel this is an avenue well worth exploring here in the Irish market. So far, it has been a popular choice!

The business has grown exponentially over the last four years, due in no small part to hosting many events that have helped to build the brand. For the last two years we have hosted Women’s Golf Day in Ireland which is a global brand originating in America, and in 2015 we hosted an evening with the sports psychologist, Dr. Bob Rotella and three-time Major winner, Padraig Harrington in Roganstown Golf Club. 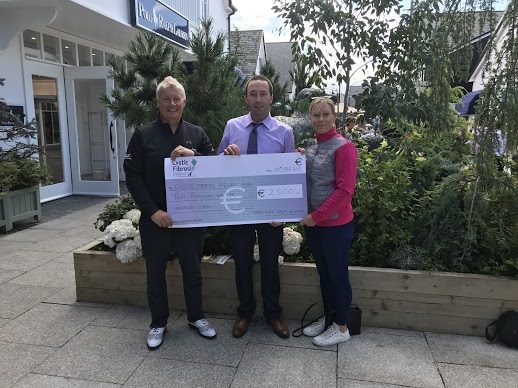 Finally, we have been active in the charity sphere, with particular emphasis on the Cystic Fibrosis charity for which we ran charity golf days in 2017 and 2018 raising substantial funds.
Credit here has to go to my partner in crime, Rebecca Codd, whose hard work drove these events.
So, that, in a nutshell, is how I got here today! In the coming weeks and months, I want to share with you what I have seen and learned in golf, both the teaching of golf and the business of golf. As I progress, I will add to the blog in terms of links to things I found interesting, maybe a video on the fundamentals of how I teach, some stats (golfers love stats!)

To finish, I will leave you with a couple of items, the first a link to a podcast that my brother Padraig Harrington did just a few days ago with the European Tour. After years of listening to the same old garbage, I thought this was refreshing and candid; it is an hour and a half long so play it in the car when you are going somewhere, it is worth the listen!

The Fed Ex Cup season has just finished, and a couple of seismic events occurred! Justin Rose, after starting his golf career nearly twenty years ago with twenty-one missed cuts has won the season-long race to be crowned “Top Dog” in the States, but the “Top Cat” award goes to the Tiger himself.
Tiger Woods, incredibly, has won again for the 80th time in his career, something that most people, including myself, would not have believed. Two stunning comebacks that keep us all coming back to golf, again and again!

Finally, this beautiful picture says it all! The Ryder Cup is upon us this week, and I will be featuring it this Thursday in my twice-weekly blog! I will have the unusual advantage of having two brothers working at the event so I will surely have some insight into the event during the week! If you got this far, thanks for reading and we will do it all again shortly!