Welcome to my world!

Welcome to my world!

Become a better putter the easy way with Luca Menci and Capto Golf.

“The sculpture is already inside the stone” ~ Michelangelo.

Who is Luca Menci?

Luca Menci was born and raised in Arezzo, which is a city in the region of Tuscany, Italy. The 56-year-old has one brother and is married to his business partner, Francesca. They have two young boys.

His early career was dominated by mechanical engineering, and he gained his degree at the University of Florence which is about 60 kilometers away from Arezzo. It was here that he was introduced to the world of 3D (three-dimensional space) and he went on to specialize in measurements of energy using sensors and computers. For the next twenty years, he worked on 3D mapping in the geological, architectural, and forensic fields and eventually finished up working on aeronautical and satellite applications.

In 1999, he founded the engineering company, Menci Software, which specialized in remote aerial and satellite measurement. During this time he collaborated on many projects with famous Italian universities and exported his technology throughout the world. His first foray into golf came in 2016 when he founded a new company, Precision, which produced Capto, a device designed to help golfers analyze their putting strokes using a high-frequency inertial system. 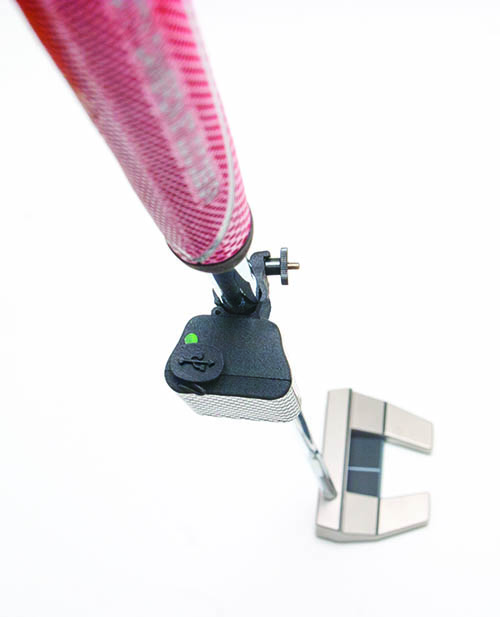 “The child looks at the world with the ingeniousness, innocence, and intelligence of its age.
It gets excited for reasons that cannot be attributed to mere rational thought.” Giovanni Pascoli.

I first met Luca at a Capto putting seminar in Italy in 2018 and was struck by his almost boyish innocence and delight as he discussed his vision to help golfers become better putters using the world of science and technology. He has worked tirelessly to develop a tiny unit that attaches to the shaft of the putter which contains fourteen sensors.

Capto golfs putting technology analysis system can determine where the putter is in 3D space, has its own Wi-Fi, is lightweight, waterproof and mobile. This is the first time that this type of technology has been introduced to putting in golf and has been described as a game changer.

The interface for the system is designed to be as complex or as simple as you wish with multiple parameters available on request and also custom screens to satisfy both the teacher and the pupil. It contains an interesting screen displaying lie, shaft and face angles which gives you the ability to determine if the putter is the correct fit for the player using it.

3D is measured in both graph and video display with Luca’s unique take of what he terms putting kernels (a robotics term) in which he describes the basis of his putting theory, the law of the pendulum concerning the main rotation and secondary rotations. Needless to say for someone who was brought up on a staple diet of tilting up through the ball, this was a fascinating insight into the future of golf. 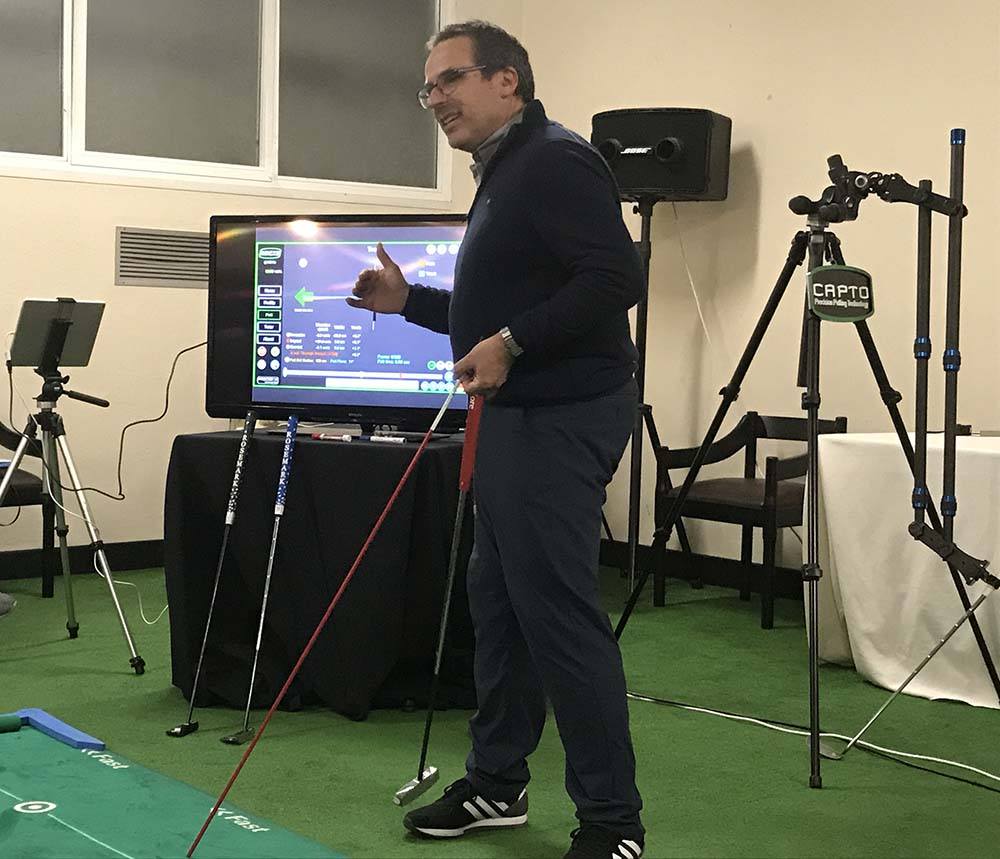 Having spent some time with Luca at his home in Tuscany, I found him to have a deep understanding of the science behind golf motion in both the long game and specifically putting. He has written a book on the subject called “Zero in Putting” which talks about his theories on golf but it is akin to reading Ulysses by the noted Irish author, James Joyce, strictly for the aficionado. In saying that, I enjoyed it but I would have been exposed to 3D at the Titleist Performance Institute and would have a keen interest in the subject!

“Zero in Putting” the book.

The book is divided neatly into sections addressing all the facets of putting and it is a quote early on in the book that resonates, “The child looks at the world with the ingeniousness, innocence, and intelligence of its age. It gets excited for reasons that cannot be attributed to mere rational thought.” Giovanni Pascoli.

This is precisely how you will feel as you wander through this masterpiece; the man is either a fool or a genius such is the magnitude of his studies. His putt kernel and shaft kernel theory are at the heart of his rotational scientific hypothesis and are groundbreaking in terms of his assertion that many terms that we use to describe common problems in putting today are open to interpretation. 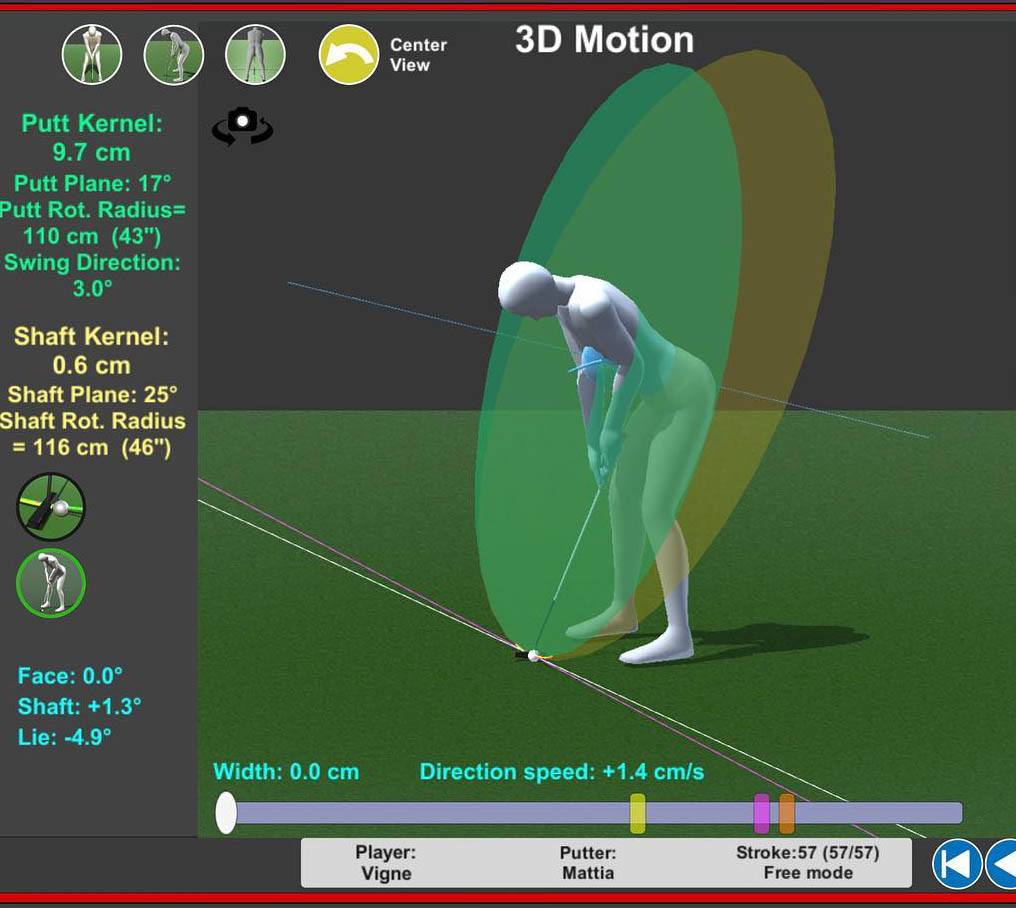 “The center is the  putt kernel which is the main rotation.” ~ Luca Menci

On a broader level, he feels that it is quite difficult for the golfer to have the proper perception of their body in space, which ties in nicely with the Harrington Golf Academy assertion that golfers are guilty of trying to bring a static solution to a dynamic problem.

Golf putting mistakes and how to improve.

This unique awareness problem is heightened when you see golfers looking at static positions in their swing as if trying to mimic a specific swing position that they had seen in a magazine!

Luca asserts that the future of golf is the six degrees of motion described in 3D space and not static positions. The balancing of actions and reactions translates into harmonious development around the center (the putt kernel ~ main rotation) and research of the center is the key to understand the movement. He encourages us to try and find the essence of putting through the laws of physics. 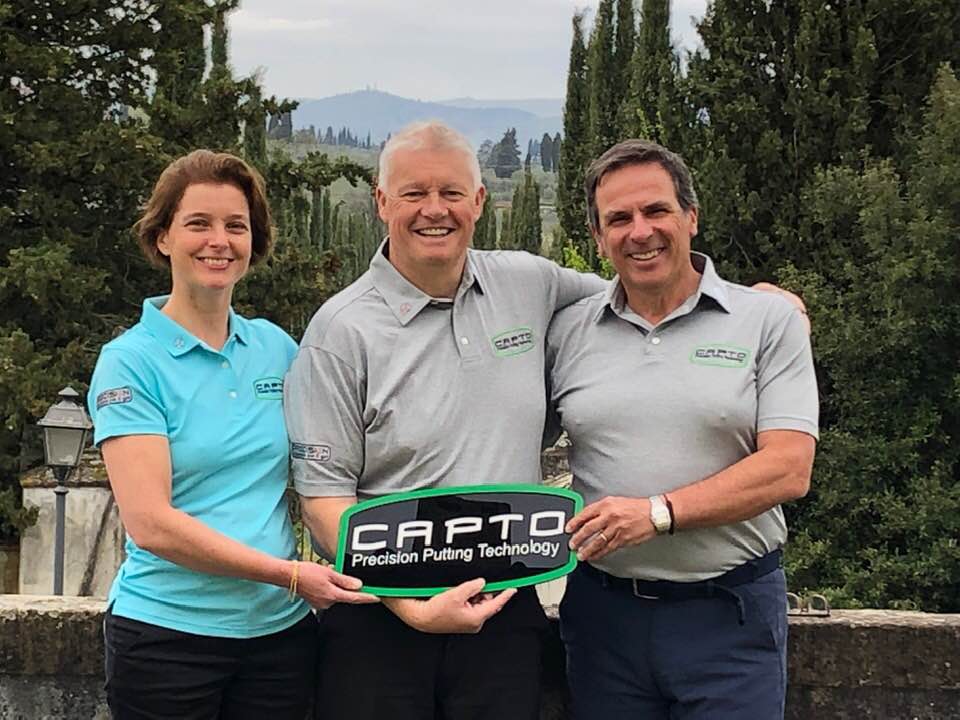 Research and development continue apace in Tuscany with some new and exciting products coming to market that will debut at the golf show in Orlando in 2020. The Harrington Golf Academy has recently partnered with Capto Golf to develop and test future products to help golfers improve. The vision of both companies is to bring the repetitions needed to learn the required motor skills for golf down to manageable proportions for the average golfer.  The future looks bright for Luca and Capto Golf.