Is Golf Art or Science?

“ I taught myself a different game. And because I was born next to a golf course, there were times when I would go onto it at night and play in the dark. I learned my feel for the game and how to play unusual shots.”

“When in trouble, I always stand directly behind the ball, stare intently at my target, and wait patiently for the movies to begin.”

The most famous artist ever to grace the fairways of golf was Severiano Ballesteros, who was born on the 9th April 1957 in a small village called Pedrena in Northern Spain. His background was one of tough times with no environmental circumstances to suggest the path that he would eventually tread. He learned the game with a three-iron in his hand (a hand me down from his elder brother) on the beaches near his home and under the moonlight of his local course, (they didn’t have a membership category for his social standing.)  The word “genius” is greatly overused in today’s modern reporting of sport, but Seve Ballesteros was Picasso, and Michelangelo rolled into one when it came to playing golf. The following quote sums up succinctly how the so-called “car park champion,” found, with customary aplomb, trouble off the tee and then extracted himself with glee from what appeared to mere mortals, the most hopeless of situations. 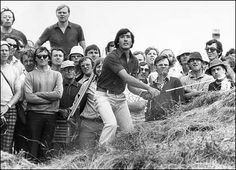 “When in trouble, I always stand directly behind the ball, stare intently at my target, and wait patiently for the movies to begin. Sometimes I see so many shots come to life that I think I’m looking into a kaleidoscope. When that happens, I stay in the same spot as I rerun all the options until I ‘see’ one working better than the others. Then, and only then, do I visualize the specific swing needed to execute the shot, and finally select the proper club for the task.”

While others merely joined the dots, Ballesteros painted long sweeping strokes that defied explanation. His was a life of pure and unadulterated genius while wielding a golf club.

“When a team outgrows individual performance and learns team confidence, excellence becomes a reality. None of the things I have done would have been accomplished without a true team effort.”

Even his website celebrates the journey that Justin Rose has taken. It has been one of team building, of constant dedication to his art through the use of science. He is an avowed technology buff with his swing coach Sean Foley being one of the foremost advocates of numbers and systems to improve his golfers. Justin Rose announced his presence to the golfing world in a blaze of glory at the tender age of seventeen when he finished third as an amateur in the 1998 Open Championship at Royal Birkdale, holing his approach shot at the last! He then suffered the ignominy as a professional of missing twenty-one cuts in a row, but he never lost hope, and through the use of science and technology has risen all the way to world number one. His recent signing with club manufacturer Honma was greeted with incredulity as the stories of golfers who have changed manufacturers and struggled are legendary. Rose promptly won with his new clubs at the Farmers Insurance Open in January 2019, proving that science has reached the stage that companies can now replicate the exact same specifications for players who wish to switch. It should be noted that Rose was a serial winner as a youngster, had broken 70 by the time he was eleven years of age, and was playing to a plus-three handicap at just age fourteen!

“If I had your talent, I’d be doing the same thing you’re doing.” Tiger Woods on being invited to go drinking by John Daly.

On the 8th August 1991, a complete unknown professional golfer drove through the night to make his tee time for the PGA Championship, which was being held at the notoriously difficult Crooked Stick Golf Club in Carmel, Indiana. He had been the 9th alternative to play in that year’s last Major and went on to demolish a quality field by three shots with some quite remarkable swashbuckling shots. He never had the benefit of a practice round, was a complete tour rookie and it was his first tour victory. Unheard off. His “grip it, and rip it” style endeared him to the fans, and he was on his way to instant stardom. What could possibly go wrong? 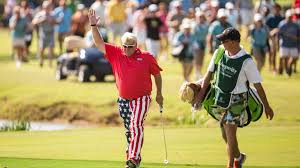 John Patrick Daly was born on the 28th of April 1966 in Carmichael, California, USA. When Tiger Woods, one of the greatest players ever to play the game of golf, can see, smell and touch the raw talent that was John Daly, the golfer, it was an incredible story of the artist known as “wild thing” prevailing against all the odds. John started out in life in a middle-class family that did a lot of moving across the Southern States as he was growing up, but he still took up golf from a very young age. He showed an aptitude for the game that was uncanny and was winning from junior high upwards. His first big amateur win was the 1983 Missouri State Championship. He made solid, if not spectacular progress, all the way up through the golfing ranks to win eighteen professional titles, including two Majors! Trouble of the drinking and gambling kind has dogged John throughout his career. In his autobiography of 2006, he admitted to gambling away the eye-watering sum of 50 to 60 million dollars.
John, the sublime artist, with the booming drives and deft touch around the greens, has led a life that has been touched by angels and cursed by devils.

It was May 2018, and Frankie Molinari was standing on the 18th green at the Players Championship looking visibly distressed. He had just missed the cut around the infamous TPC Sawgrass course and knew it was time for a change. He turned to science with his long term coach, Denis Pugh, and made subtle changes to his swing in response to data obtained on a 3D measuring system. He also started using the Capto putting system to groove a flawless stroke. Dave Alred, the noted performance coach, came on board to keep the practice sessions at a high-intensity level, and the results since have been astonishing. He won his first Major later that year at the Open Championship, where he hunted down a charging Tiger Woods and then produced flawless golf to record five wins from five matches at the Ryder Cup held in Paris. That form has spilled over into 2019 as he recently won the Arnold Palmer Invitational to record his third PGA Tour win. It is with some justification that Frankie is known as Trackman with arms; such is his unerring iron play when competing.

“Better than most!” Gary Koch

No conversation about science and art in golf would be complete without reference to one of the greatest players ever to play the game, Tiger Woods. It is doubtful that he has left any stone unturned as he brought the science of hitting a golf ball to the art of his short game. As a teacher, I know how difficult it is to change a golf swing permanently. The snake oil salesmen with their thirty-minute promise of lasting improvement have developed the art form of telling you porky pies. In this context, for a player to change his swing four times, especially after outstanding success is mind-blowing. He has literally picked the brains of every coach worth talking to in his search for the perfect swing. It is this balance of using science and technology allied with the artistic skills that saw him dominate the game of golf for a period of time like no other. That he could create the canvas of works that he has produced, the impossible chip in from the back of the 16th at the 2005 Masters, the holed putt from the back on the 17th green at TPC Sawgrass in 2001, the 2008 US Open win when hobbling on one foot is a testament to a golfing genius.

“Sofia, leave the pieces alone,” but Daddy, “they won’t leave me alone.”

Let me finish with the story of the Hungarian chess teacher and psychologist, Laszlo Polgar. He had a theory that geniuses weren’t born, that they could be created if the right circumstances were put in place. He, along with his wife, Kiara, raised three daughters, Susan, Sofia, and Judit, to become chess geniuses. Using the science of habit, the girls were surrounded from an early age with chess and were homeschooled to encourage the habit loop of cue, craving, response, and reward. They were encouraged and praised as they learned the game and reported in later years that they found it quite normal and enjoyed their upbringing. An obsession with chess was healthy. Whatever habits are regular in your culture, become the most attractive behaviors you can find and tend to stick around.
The youngest girl, Judit, became the youngest grandmaster ever at the tender age of 15 years and four months beating the record held by one Bobby Fisher. She was the number one ranked female player in the world for 27 years! One night Laszlo found his daughter Sophia playing chess in the early hours of the morning and told her to go to bed, saying, “leave the pieces alone.” Sophia replied, “Daddy, they won’t leave me alone.” Repetition is key in the right environment.

How much work did Severiano Ballesteros get through growing up in that small village in Spain?
True artists don’t realize the volume of work that they get through. They are repeating the task over and over again because they know no better and enjoy the journey. It is not work to them; it is their purpose.
The lines for me are blurred between science and art in golf. It is some combination of the two that have worked best for the most successful players. One alone will only take you so far, but it is also a reality that the sheer volume of work that players need to create is the true gateway to their genius.

The closest we have come to the Polgar sisters in golf is Tiger Woods, but it would be churlish to suggest that science alone created young Tiger who was drilled to within an inch of his life by his father, Earl. You still need the innate desire to achieve even if all the science in the world is thrown at you, and as big John Daly will attest to, art alone will only take you so far.

When art, science, and hard work collide, you get Tiger Woods. 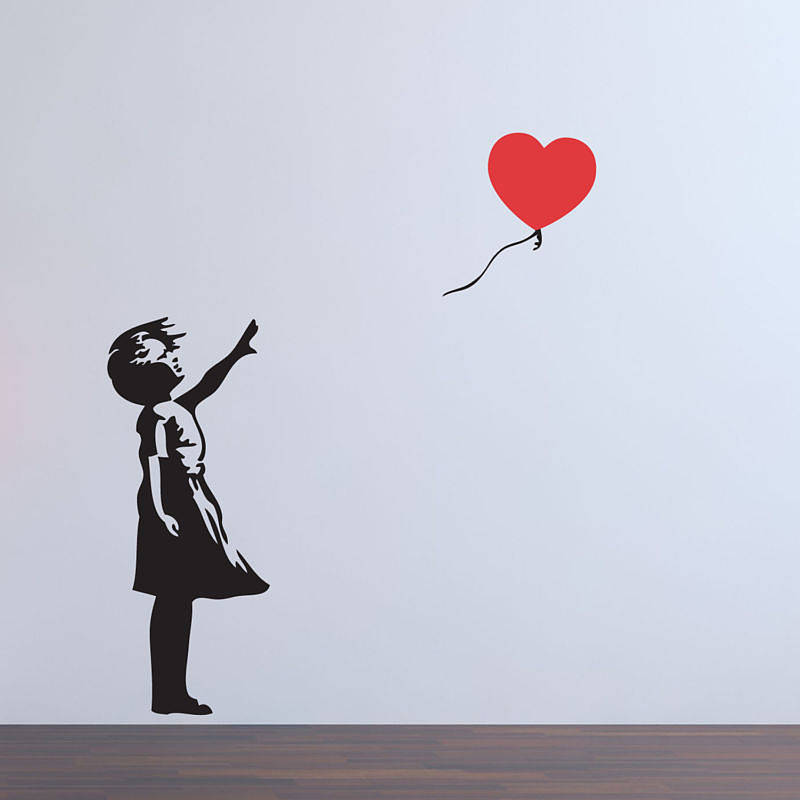